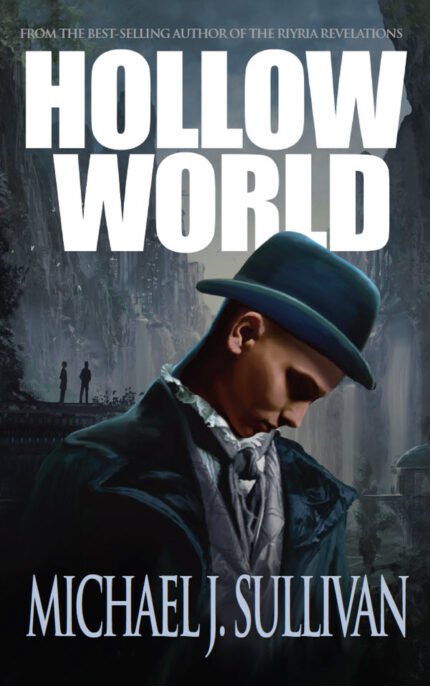 “You’re unique—truly unique. You have hair—and it’s two colors. Your skin sags, and has all those great creases, like a beloved knapsack that has been taken everywhere and shows evidence of every mile. No one else has that.”


This is going to be a slightly biased review because I’ve read pretty much everything Michael has published and loved most of it. That combined with the fact that Michael is immensely approachable and a very straight-forward person makes for a mixture I can’t resist.

You might want to read another of Michael’s books first, though, to find out if you like his style. Hollow World, while definitely a Sullivan, is maybe not the best introduction. For that, I’d like to recommend his Riyria Revelations books to you.


That said, bias or not – this book was very interesting, exciting and entertaining. In “Hollow World”, Ellis Rogers, a 58-year old man with a difficult family history escapes his wife of 35 years and his best friend, Warren, when he receives the news that he’s terminally ill. Using a DIY time machine built in his garage, he jumps 2000 years into mankind’s future.

I have a few (minor) gripes with Hollow World: I’d certainly have enjoyed to get to “see” a bit more of the world itself. Yes, we get introduced to some individuals (voxes, wonderful!) but I know for a fact that Michael has a real knack for world building (read Legends of the First Empire if you don’t believe me) and I wish he’d used it more extensively.

When we reach the main part of the story (a bit too early), we’re strongly exposed to “god and country”, “Old West” and “Good old times” stuff. Again, yes, it’s intentional but it’s going slightly overboard for my taste.

Especially when Ellis Rogers – who seemed mostly sane till that point – picks up on the religious stuff I rolled my eyes.

I also wished for Michael to be a bit bolder about Ellis and Pax. There’s a lot to be said for not making things too easy and even at some key moments (“You recognised me!”) even the daftest old-fashioned guy should come around to see what’s happening.

On the other hand, the way Michael describes the relationship between Pax and Ellis is believable and – considering Ellis’ past experience – it’s probably much to ask for him to embrace what’s going on.

Plus: The door is not closed to more stories from Hollow World, I think. It has a lot of potential yet and I’d like to read more of it, especially about Ellis and Pax and humanity at that point of its development because the philosophical issues beyond the shallow religious meandering are still to be explored more fully.

Maybe taking up just a little fewer major topics in one book would be good because, as Michael writes in the afterword, Hollow World encompasses “liberal versus conservative, gay rights, religion, and God” and it’s hard to do justice to all of those within the confines of a single novel.

And, honestly, there’s nothing to argue about equality (not “gay rights”, Michael). Trying to tell anyone whom they’re supposed (or not supposed) to love has nothing to do with “dualities” but is simply infringing on other people’s turf – just ask Pax.


Anyway, one conclusion still holds true after reading a less-typical Sullivan: When I look at my “Favourites” shelf on GoodReads, I see Paul Auster, Isabelle Allende, Thomas Mann, J. R. R. Tolkien and Michael J. Sullivan – it’s just that only the last one never disappointed.