Re-testing patches in Gerrit with Jenkins

A recent request concerned the possibility to re-test patches patches in Gerrit with Jenkins. I’ve now added a very simple switch for that:

In any given given change (but your own!), you can add a comment with “+1 Retest” set as a “verdict”. On the old change screen (really, change to the new one, it’s much nicer), it looks like this: 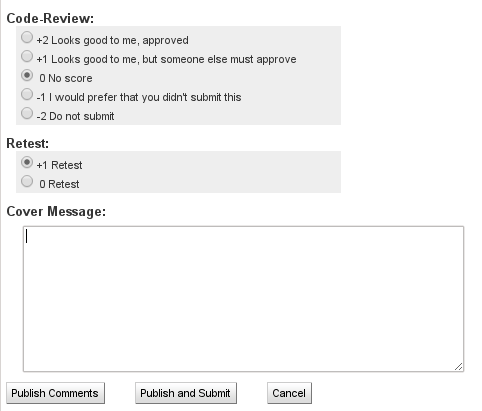 On the new change screen, it looks like this:

It’s really, truly easy. You can even do it multiple time – just uncheck the “Retest” checkbox (new screen) or set “0 Retest” (old screen) first and then set it again.

This works for any change as long as you are a registered user – any change but your own. Unfortunately, the Jenkins’ Gerrit-Trigger plugin simply ignores the “CommentAdded” event completely for ones own changes. If you want those re-tested, just amend your commit (no need to actually change anything; the commit timestamp will be updated) and Jenkins will see the patch’s new revision and re-run the test.

On a side note, I’d like to apologise for the instability for about 1,5 days earlier this week. There were some really nasty hardware/software issue that I had to sort out. This is done now, though, and things are running smoothly again.

This work by Wulf C. Krueger is licensed under Attribution-ShareAlike 4.0 International