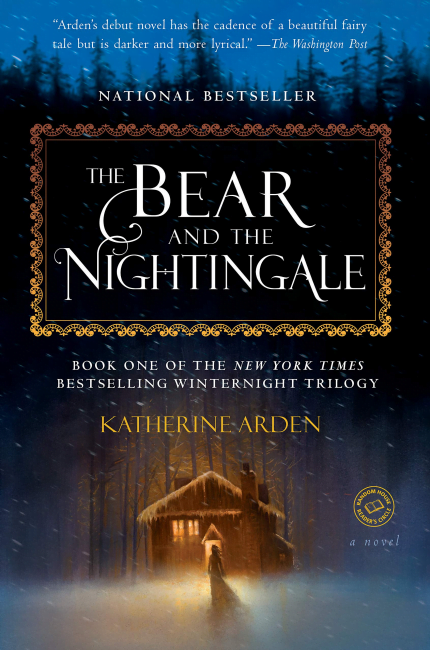 The Bear and the Nightingale by Katherine Arden

“That evening, the old lady sat in the best place for talking: in the kitchen, on the wooden bench beside the oven.”

In the street of the small village I grew up in, there lived (and lives to this day even though she is very, very old now!) a lady of sheer infinite kindness. During the 1980’ties she still used an old oven that burned wood in her wonderfully old-fashioned kitchen. I spent many days there doing my homework for school, warming up on a wooden bench next to said oven or just hanging around listening to her stories.

Thus, when I read the introductory quote, I felt immediately reminded of those days during my childhood and I was hoping for being taken back into those simple times.

Unfortunately, this was not really to be: Many of the slavic “demons” or rather familiar spirits appearing in this book were part of her stories as well so I did feel a slight connection. Nostalgia isn’t enough, though, and this turned out to be a very, very slow read. I almost lost patience with it and might have put it aside for good because too much irked me about this book even though the story is promising:

Vasilisa “Vasya” Petrovna is the youngest daughter of Pyotr, the local squire, and Marina, his wife, who dies giving birth to Vasya. Marina’s mother had special talents and Marina just knows that Vasya will inherit those.

In fact, Vasya is a wild child, a tomboy, very down to earth and connected to nature. Above almost everything else she values (her) freedom. Due to all this, she can actually see the familiar spirits she knows so well from the old stories told by her nurse, Dunya. She lives in harmony with them, feeds them and even talks to them and learns from them.

Doom is heralded by harsh winters, though, and the arrival of a new Christian priest who tries to “save” all those “heathens” from their worship of the old gods:

“He spoke of things they did not know, of devils and torments and temptation.”

And this is where things start to go severely wrong in the book: We’re exposed to tons of religious crap. Neither the villagers nor Vasya need saving in the first place – they used to live in peace and harmony with each other and nature and only the arrival of the zealous priest makes things go deeply awry.

Religion, and especially Christianity, pretty much poisons the local society depicted here and, true to life, is basically as much a cancer there as it is in our society today.

Vasya is the only ray of light in this because she is a free spirit herself:

“I would walk into the jaws of hell itself, if it were a path of my own choosing. I would rather die tomorrow in the forest than live a hundred years of the life appointed me.”

It takes way too much of the book to get to this point where Vasya finally declares her independence. Of the titular “bear” we first get to hear after almost half the book! The “nightingale” comes even later…

Until then we have to deal with religious nuts expressing all the things that are “sinful” and even the well-meaning people like Vasya’s father are contemplating how to “save” her:

“Marina, thought Pyotr. You left me this mad girl, and I love her well. She is braver and wilder than any of my sons. But what good is that in a woman? I swore I’d keep her safe, but how can I save her from herself?”

I wanted to grab Pyotr at that point and club some sense into his thick head! No matter the gender, leave people be the way they want to be and if that includes going wild, so be it.

Only when the book is almost over do we get some true development and, thus, a glimpse at how good this book could have been had it gotten to the point a bit quicker:

“Morozko spared Vasya a quick, burning glance, and she felt an answering fire rising in her: power and freedom together.”

At the end, we get to really feel that fire, the raw (narrative) power that could have made a brilliant book! Alas, it’s still too little and too late to raise this book above the two stars I can justify to award it.

And, yet, I might actually read the second book of the trilogy to see if it’s more of the long-winded same or if Arden actually succeeds in allowing Vasya and Morozko to roam freely and wildly as they should.