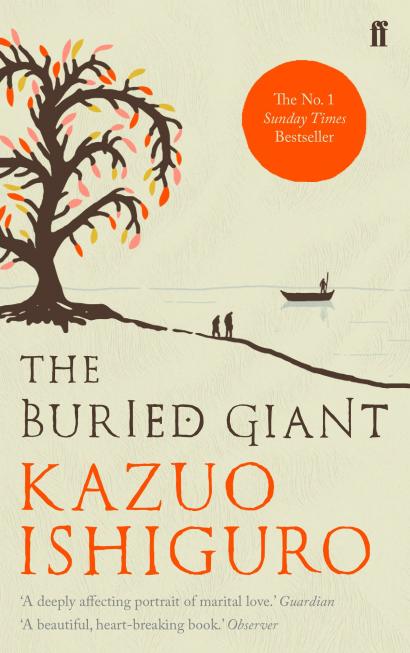 The Buried Giant by Kazuo Ishiguro

“That’s true, good lady, but then we boatmen have seen so many over the years it doesn’t take us long to see beyond deceptions. Besides, when travellers speak of their most cherished memories, it’s impossible for them to disguise the truth. A couple may claim to be bonded by love, but we boatmen may see instead resentment, anger, even hatred. Or a great barrenness. Sometimes a fear of loneliness and nothing more. Abiding love that has endured the years—that we see only rarely. When we do, we’re only too glad to ferry the couple together. Good lady, I’ve already said more than I should.”


Axl and Beatrice, an elderly couple, live in post-Roman Britain. They – like everyone – are suffering from some strange memory loss that prevents them from recalling large parts of their lives:

“Now I think of it, Axl, there may be something in what you’re always saying. It’s queer the way the world’s forgetting people and things from only yesterday and the day before that. […] Like a sickness come over us all.”

Sometimes, though, either Axl or Beatrice do remember things from their past; just like one morning Axl remembers their son who has moved to a village not too far from their home. Not having seen him for many years, they decide to visit him. The entire book is basically about their journey and the people they meet.


This book is definitely not for the casual reader – you always have to read closely and attentively or you will miss a lot of small details that are not always of great relevance but which help form the “big picture”, e. g. we learn early on that Beatrice and Axl aren’t allowed to own and use a candle at their home. When they’re talking about a cloak much later on, we learn said cloak was one they “later we lost in that fire”.

Furthermore, the entire book can be read in a number of ways – as a somewhat simple story of the arduous journey of our elderly couple, or maybe that journey itself isn’t one of physical hardship but an allegory for their life together and the challenges they encountered.

Even individual encounters and deeds during the journey can often be interpreted in many ways. The more abstract interpretation is all the more plausible as the writing style is very formal, sometimes excessively so:

“Master Ivor told us of it, and we thought it poor news to succeed your brave intervention.”

Nobody – at least today – talks like that. While this is, undoubtedly, yet another means to achieve a feeling of estrangement, it is too much for me.

In addition to this strange formality, the narrator often doesn’t directly describe the landscape but how it could or would have been at the time narrated:

“There would have been elms and willows near the water, as well as dense woodland, which in those days would have stirred a sense of foreboding.”

This adds again to the feeling of estrangement from the literal story itself and makes it harder for me to actually enjoy the story. It distances the reader from the story and while that might be the right way if you only care about your art and not your reader, I didn’t like that.

I always felt like I was being led by the nose somewhere and tried to anticipate it. I felt like being manipulated to be “educated” and I didn’t enjoy it.


The weird forgetfulness everyone is afflicted by makes for very strange dialogue like this one:

““What’s this you’re saying, princess? Was I ever the one to stop us journeying to our son’s village?” “But surely you were, Axl. Surely you were.” “When did I speak against such a journey, princess?” “I always thought you did, husband. But oh, Axl, I don’t remember clearly now you question it. And why do we stand out here, fine day though it is?”“

Uh, yes, and why are you tormenting us with repeating dialogues like that all the time?! It’s really truly annoying to have to keep reading stuff like that.

On the other hand, it’s the most important narrative feature of this book so I do understand the general need to make sure we fully understand it and its implications. Even more so since both Beatrice and Axl do remember additional fragments of memories whenever they talk in length about any given topic. Quite a bit of information is given in that indirect way.

Especially information that has been hidden before – because every character in this entire book is hiding things – some major, some minor – from everyone else. Sometimes with good reason, sometimes we simply don’t know and have to find our own answer.

Everything in this book is taxing like that, even down to the names of our heroes:

Beatrice literally means “she who makes happy” – and she is Axl’s one and only. The only person for whom he really cares and she makes him happy.

Axl means “father of peace” (or “father is peace”) and even that is quite fitting as we will learn late in the book.


“The abbot will insist we carry on as always. Others of our view will say it’s time to stop. That no forgiveness awaits us at the end of this path. That we must uncover what’s been hidden and face the past. But those voices, I fear, remain few and will not carry the day.”

While I was reading “Giant”, I constantly felt like the author was wagging his finger at me and lecturing me. Literature, to me, though, is not about lecturing. I want “my” books to entertain me, to make me think and question things but not by moralising, lecturing, finger-wagging but unobtrusively.

Maybe that’s too near to “edutainment” (which I have no qualm with) for some but that’s just the way I feel. I don’t like reading the old classics (Schiller, Goethe, etc.) either anymore – they’re just too far from my life and times.

“Giant” does read like such a classic or, possibly, a play:

“Should I fall before I pass to you my skills, promise me you’ll tend well this hatred in your heart. And should it ever flicker or threaten to die, shield it with care till the flame takes hold again. Will you promise me this, Master Edwin?”


At least a few amusing passages found their way into this book (possibly by accident!):

““Let’s come away, child,” Axl said. “This is no sight for you or your brothers. But what is it made this poor ogre so sick? Can it be your goat was diseased?” “Not diseased, sir, poisoned! We’d been feeding it more than a full week just the way Bronwen taught us. Six times each day with the leaves.””


Ultimately, though, “The Buried Giant” is lost on me due to its excessively allegorical nature and narrative complexity – if a book is so taxing, I can hardly enjoy reading it anymore, it’s simply too much for me. Maybe it’s Ishiguro handing us all the essential information to make up our own mind and come to our own conclusions and it’s just me.

I didn’t give up on this book but I’m giving up on its author for good.