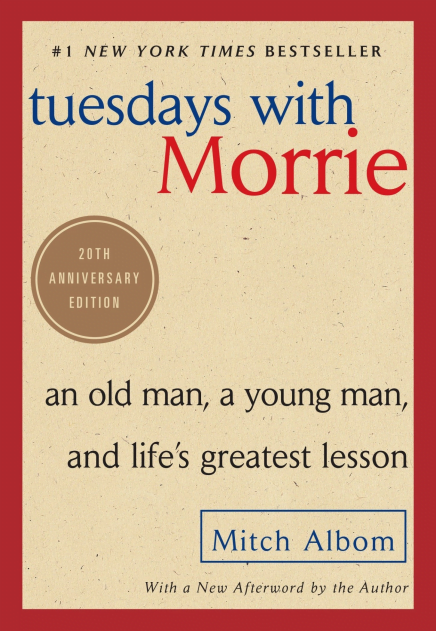 Tuesdays with Morrie by Mitch Albom


When I was around the age of 18 – the age of majority in Germany – I felt like I had broken through some magical barrier to adulthood. (I hadn’t.)

Now, I felt, it was my sacred duty (it wasn’t) to find out about – imagine a drum roll if you will – nothing lesser than the meaning of life itself. (Didn’t find it.)

Young me contacted the most well-meaning, wisest and awe-inspiring people I knew (not my parents) and asked them indirectly what the meaning of life is. I think I received exactly one answer and that went like “You’ll have to find out for yourself.”. It took me about 20 years to figure that one out:

There is no “meaning of life”. There is just what we figure out we want to do with our lives and how we live it. I have a vague idea for myself but I’m still figuring it out and I think the “figuring it out” part matters much more than the result – especially since for me, said result is always changing. Not in substance but in nuances.

Along comes a book whose author states:

“The subject was The Meaning of Life. It was taught from experience.”

As if that wasn’t pretentious enough in itself, we all have to figure it out for ourselves. And who is either Mitch Albom or Morrie to judge that “So many people walk around with a meaningless life.”?

Albom isn’t a great writer either: His simple style and his child-like adoration of Morris Schwartz drives him to try writing his idol into a pseudo-religious transcendent figure:

“And the things he was saying in his final months on earth seemed to transcend all religious differences.”

I’m sorry, I can buy into Morrie having been a very kind and interesting person but to basically glorify him like that cannot do any person justice.

In its entirety, “Tuesdays with Morrie” feels like a collection of anecdotes, the glorification of the mundane and stating the obvious. Beyond its inherent merit of paying its subject’s medical bills, it wasn’t worth reading for me.