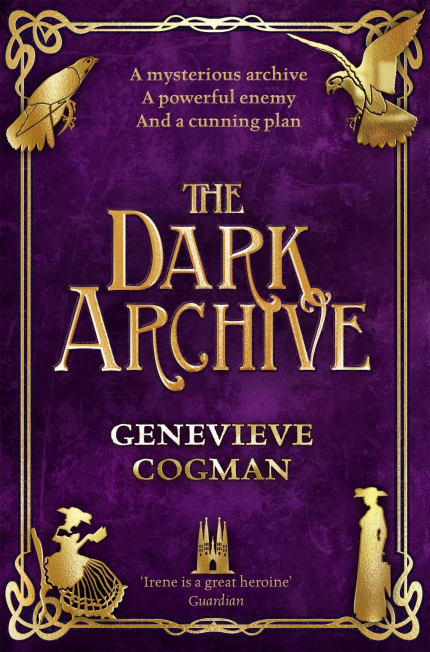 The Dark Archive by Genevieve Cogman


As of right now, I’m actually still undecided how many stars I’m going to award “The Dark Archive” as, unfortunately, I cannot do five stars but oscillate between three and four starts… Let’s get going and see where reflection leads me…

So, the seventh instalment of “The Invisible Library” lies behind me – and a whole new field of opportunities for further books has been opened on several levels.

That’s good because just as we change throughout life, so must a series of books as it evolves or it will outlive its welcome – at the very least with me.
Evolution does have its risks and drawbacks, though, and to get all the characters – new and old – to where they need to be; to set the stage for what’s to come, Cogman seems to have lost a little bit of the plot.

More on that later, though. Let’s start with the good news: This is, indeed, undeniably and recognizable “The Invisible Library” how we know and love it: Irene Winters, the protagonist, is at the height of her game and, as usual, chasing after another important book.

With her is Catherine, the woefully-absent Lord Silver’s niece, Irene’s new apprentice. Silver himself has fled London due to immediate threats. Catherine aspires to become a librarian – an archetypal one, of course, which leads to some… challenges… in her relationship with Irene.
While Catherine starts out as your “run-of-the-mill” Fae, she organically and believably develops throughout the novel which I truly enjoyed witnessing. This speaks highly of Cogman’s ability to create and nurture convincing characters.

Speaking of “development” inevitably leads me to Kai: Kai gets a few scenes only to himself which I liked and which were nicely integrated into the story as a whole. There’s not much outward relationship development between Kai and Irene – with the exception of one crucial point… Not perfect but I liked its unobtrusiveness.

Another welcome new addition to the cast is Shan Yuan, Kai’s older brother, whom Kai defers to but who, in turn, seems to loathe Kai. While I don’t like him as a person, Shan is an interesting character at the very least whose addition I enjoyed.

Vale is with us throughout most of the book as well: London’s great detective hunts “The Professor” – which is a lovely pseudonym, paying homage to both J.R.R. Tolkien (you can do, too, with the Tolkien Birthday Toast) and Sherlock Holmes’ greatest adversary, Moriarty, whom every devotee worth his salt will know.

Said Professor understandably doesn’t really enjoy being hunted and, thus, sends assassins after several of our heroes which makes for a fast-paced and action-loaded novel. It’s just like always when you’re enjoying a book – “just one more chapter” stole me quite a few hours of sleep (but fortunately, I’m on holidays right now!).

Cogman’s light-hearted and (mostly) friendly trademark humour is present as well, for example, when Irene and Kai philosophize about universal healthcare and other current issues. (Still unforgotten, last book’s witty reference to a certain hare-brained Prime Minister who is, unfortunately, still leading his country back into the bad old times…)

With so much light, there is some shadow as well: The plot itself is a bit thin for me. Yes, we do get a story but it doesn’t really hold water. There are no real “leaks” but in the heat of the action said water dissipates and once we’re in a calmer phase, we do get to wonder about what’s behind all this… The epilogue might hint at what lies ahead but, still, this is a small blemish on an otherwise good book.

A secondary blemish is one choice of Irene’s, a casual cruelty, which was not strictly necessary and feels out of character. Yes, she admonishes herself immediately for it and that somewhat relativises it but it still marred my picture of Irene.

Despite these blemishes, though, this is a fast-paced, enjoyable and oftentimes funny book that fits well into Cogman’s fictitious universe – and ours, of course.

Well, my reflection finished and all said and done, I’m now ready to decide upon the initial question of awarding stars: A slightly-generous four stars it is.


Oh, and a huge “Thank You” to you, Genevieve, for writing this book – and for gifting me a copy! (In contrast to the former, the latter had no influence on this review!)