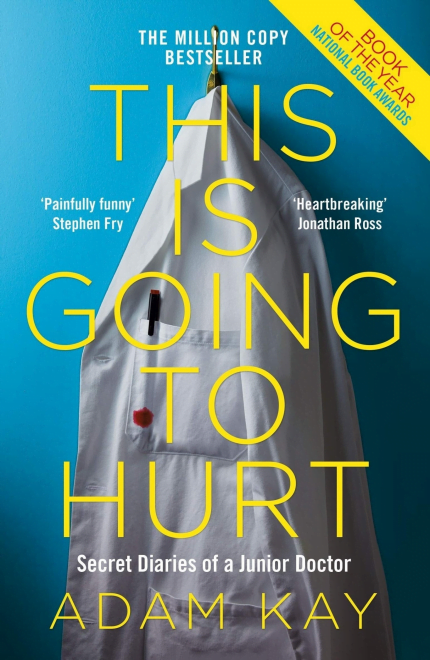 This is Going to Hurt: Secret Diaries of a Junior Doctor by Adam Kay


»This morning I delivered little baby Sayton – pronounced Satan, as in King of the Underworld.«

Wow, what a ride! Adam Kay, doctor gone writer, describes what he experienced in six years of medical practice in the United Kingdom.

In about 10 chapters, Adam first introduces us to the new position or posting he’s in now. He then proceeds to write in usually short passages in anecdotal style to explain the manifold lows and highs of his profession.

There were passages I laughed out loud at (something I rarely do and which garnered me curious and worried looks from my family), some that I thought couldn’t be true and others again that really truly hurt.
So, first information if you want to read this book: On multiple levels, the title is extremely well chosen.

Definitely dominant, though, is a wonderfully dry humour that, I imagine, in part allowed Adam to pull through those obviously at least partly hard, harsh years.

»Clearly blood isn’t the delicious post-delivery snack she imagines placenta might be.«

Another part seems to be Adam’s deeply ingrained empathy for his patients – even though the latter ultimately drove him out of his profession.
He honestly describes some horrible experiences, e. g. when having to take samples from a still-born baby:

It’s this kind of doctor I would wish to treat me or my family. One that will, like Adam explains his doctor persona, go »for a ‘straight to the point’ vibe – no nonsense, no small talk, let’s deal with the matter in hand, a bit of sarcasm thrown into the mix.«

This kind of approach is applied in “This is Going to Hurt: Secret Diaries of a Junior Doctor” as well: You get dumped straight into the “action” – be it sweet (as in the case of the baby named after him) or bitter (as the incident that made Adam leave his medical profession).
Every word he writes feels honest and rings true in every respect.

And just like that, Adam Kay single-handedly improved my opinion on doctors – because I don’t see a huge influx from the UK to my country, Germany, I suspect things aren’t all that much better over here either…

If you just want to read an excellent book beyond all its merits mentioned before, you’re on the right track as well: Instead of “just one more page” I was like “just one more diary entry” and kept repeating that till I noticed I had read the same diary entry a few times already and I simply couldn’t concentrate anymore – it’s just that good.

If you remember (and hopefully like) James Herriot’s wonderful stories from his life as a country vet in Yorkshire, you might, at times at least, feel reminded of Herriot – a younger, sharper and more sarcastic version, though.

A brilliant, hilarious, heart-breaking book. Unreservedly recommended to anyone who reads. Five out of five stars.